You were either working at a feverish pace or you were gone – your choice! During the construction years, thousands made Kitimat their temporary home. Housing was a challenge and many ways were found to house all the personnel in bunkhouses, trailers, small houses on skids, and an old sternwheeler, the Delta King, all in various camps between Smeltersite and Townsite.

Camp life had its perks. Smeltersite had lighted streets, a Hudson’s Bay, bank, cafeterias, school, post office, hospital, RCMP, recreation hall, and small shops. The Hudson’s Bay Trading Company as outpost in a place of pioneering, sold everything, including groceries.

The recreation halls were beehives of activity. There were nightly movies, amateur theatre, talent shows, art exhibitions, and concerts. Sports at the recreation halls included table tennis, basketball and floor hockey. Social clubs, a discussion group, a library, and a lecture series on photography started up. Anderson Creek Camp had a twelve-lane bowling alley, billiards and snooker. Drinking and gambling added to Kitimat’s reputation as a crazy frontier town.

Workers in the Mess Hall

Loyal Order of the Seagull Coat of Arms

Mrs. Stackhouse with Her Catch of Fish 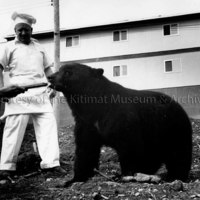 Line up at the Bank of Montreal

Exterior of the Hudson's Bay Company

← Transport In
Sharing the Vision →
On the Ball